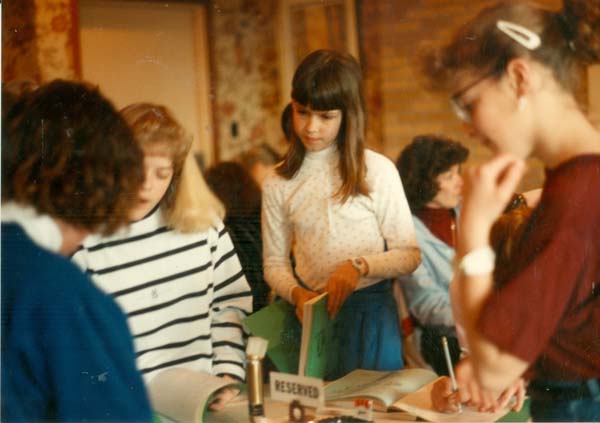 (1989) Jennifer Williams as a child, participating in Big Stories by Little Authors at Normal Public Library

When a boy whom she’d casually dated in the past turned up at her house and asked her out for ice cream, Jennifer Williams, without a hint of irony, replied that she could not go because she planned to visit the library instead.

Williams, who was 16 at the time, looks back on this story with humor and fondness and maintains that she made the right decision. Her love affair with the Normal Public Library has continued unabated throughout the years, as Williams has transitioned from devoted patron to part-time staff member to Children’s Librarian. But she does occasionally play hard to get.

Williams grew up in central Illinois, and spent a great deal of her youth at Normal Public Library, doing everything from Summer Reading to Big Stories by Little Authors. But despite all of her warm library memories, Williams never envisioned returning to NPL as a librarian.

After high school, Williams started work at Normal Public Library as a work-study student at ISU. When she shared news of her part-time position with her family, they eagerly suggested the job might turn into a career. She balked at the prospect, as a distinct “Nope!” ran through her mind.

Nowadays, Williams relishes knowing exactly where she wants to be. From meeting authors to leading story hours to fielding questions from patrons, Williams embraces the varied nature of her work. And although she’s dabbled in Adult Services, her love for the Children’s Department remains steadfast.

“My very favorite thing is helping people find books to read,” Williams said. “Whether they’re children or adults. And I think anyone can read children’s books—there’s a lot of really good ones out there.”

Story Hour with two-year-olds is her favorite time of the week, as the family-oriented program allows her to witness firsthand as children begin to make the connection between reading and playing.

It’s no surprise that Williams is enthused about seeing these connections forming at NPL, considering her own formative experience here. And for a librarian and self-confessed bibliophile, it’s a big one: her first time reading.

Williams distinctly remembers the first book she ever read on her own--a Frog and Toad story that she’d checked out from the library earlier that day. Although just five-years-old at the time, she recalls retreating to examine the book alone. As she studied it, she worked to understand it, and soon found herself in a world of her own.

“That’s when it all came together for me, and I know the library was involved in that,” Williams said.